Earlier this year, I booked a roundtrip business class ticket to Europe for only 60,000 US Airways miles. This award no longer exists, unfortunately, but you can still book off-peak economy class tickets to Europe on US Airways for only 35,000 miles (only 30k if you have a US Airways credit card). The only catch is that you have to fly US Airways flights, and most people don’t think of US Airways as a great airline, but their updated aircraft to Europe are pretty decent.

The actual routing was SFO to PHL to CDG. Since I was flying in Envoy, I had access to the US Airways lounges at Philadelphia. You can also get access to all US Airways lounges through the American Express Platinum card regardless of my class of service or airline, and with the Amex Plat, you can also bring in 2 guests for free. The former Envoy lounge at PHL

The lounge was relatively crowded when I arrived, but that was likely due to the timing of many of the transatlantic flights out of PHL. I also made the mistake of turning to the right instead of the left in the lounge: the right side is considerably more crowded because that’s where the bar is, but if you’re okay with walking a little further to get your alcohol, then I recommend heading to the less-crowded left side. Food spread at US Airways lounge

The lounge was pretty decent for a domestic lounge, so overall pretty unremarkable/somewhat poor for a lounge in general. The food and beverage offerings were a little lacking, but it was spacious with fast wifi and a fair number of power outlets, so it was a decent place to wait a couple of hours.

Pretty soon, it was time to board my flight to Paris. The cabin was relatively full in business class with only a couple of empty seats, but economy class was only half full or so. The Envoy class seats are nice. It’s a reverse herringbone design, which is the same design that Cathay Pacific uses in their updated business class. There’s plenty of room, they convert to fully flat beds, each seat has aisle access, and they’re pretty comfortable for sitting and lounging as well. On the other hand, it’s clear that the seats on US Airways could be better maintained. There appeared to be particles of food stuck between the seat and the compartment, the cubby for storing a small bag was a bit dirty, and it generally seemed a little run-down for such a nice seat.

Entertainment options are pretty good for transatlantic flights. Even in economy, there’s video on demand and power ports at seats, and there were a number of recent movies that I wanted to see like Argo and Lincoln (not that I chose to watch such well-made movies). In Envoy class, they distribute headphones, but they’re not noise canceling. They also only turn on the entertainment system once the flight is airborne. 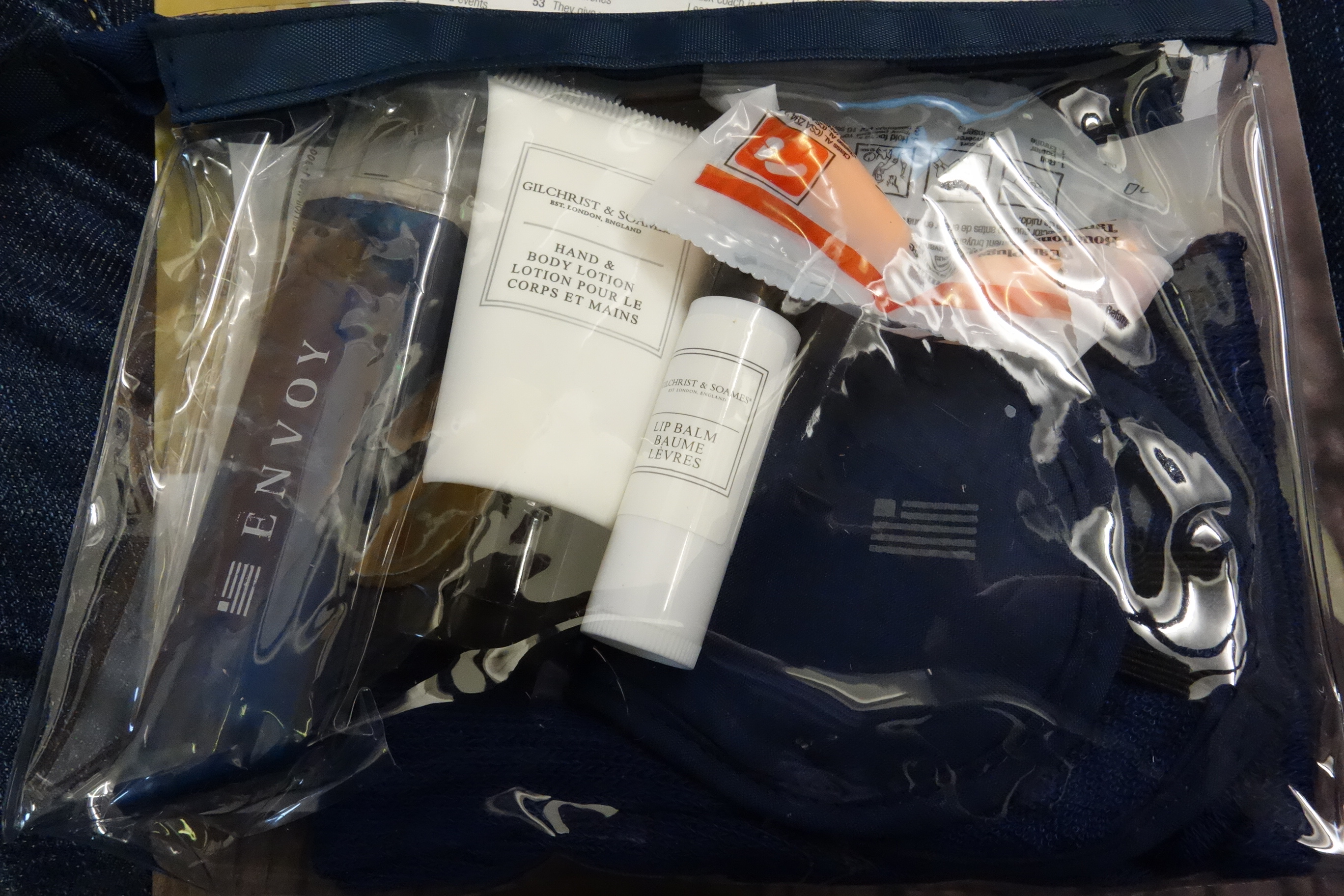 And here’s the dinner menu: The food was overall okay. Definitely better than a coach meal, but overall a pretty forgettable meal. The food was better heading to Paris than it was coming back. Pasta. I think it was supposed to come with a cream sauce? The service was friendly, if slightly incompetent. Maybe it’s because I’m Asian, but I don’t think the flight attendant expected me to speak fluent English and would talk to me very slowly and loudly. In addition, when I asked for prosecco to go with my dinner (since that’s what was on the menu), he just stared at me blankly. So instead I asked him for champagne, and he served me the prosecco.

I enjoyed sitting in 2H given that it has 3 windows compared to 2 for many other window seats. In addition, on both transatlantic flights I took, meal orders were taken from front to back. For a couple traveling together, I would probably recommend getting two seats across the aisle (e.g. 3A and 3D) rather than the two center seats since the divide between the center seats means that you’d have to lean forward to talk to each other instead of just turning your head to see each other.

Overall, it was a good flight, even if I didn’t get much sleep due to the timing of the flight (it departed at roughly 3:30pm Pacific and landed in Paris at 11pm Pacific). The seat and hard product were awesome, while the service was what’s to be expected from US Airways. It’s a pity that the off-peak Envoy class awards to Europe are no longer available since 60k miles is a steal (coach tickets for the dates I was looking at were over $1100).