After the shortest car transfer ever from the First Class Terminal, we were ready to board the 747 that would take us to New York. Boarding from the van

One of the biggest reasons why I chose this flight was to fly the Boeing 747-400 config which has a separate seat and bed for first class seats. While I had the opportunity to have a separate seat as a bed anyway on my previous flight since I was the only passenger in the cabin, this is the only config that guarantees that luxury.

Even though there were 5 people in the van from the First Class Terminal, only two of us headed to the upper deck to the first class seating area. First class was half-full on this flight, with the other three passengers sitting in the front half of the cabin while I had the back half all to myself. Front of the cabin Back half of the cabin to myself

The 747-400 definitely feels older and it’s much noisier, but I think this is the most comfortable seat configuration you can fly (assuming you only get one seat, of course). The seat and bed for each passenger is excessive, but the bed itself is the most comfortable bed I’ve slept in on a plane since it’s actually a bed and not a seat masquerading as a bed. And then there’s the fact that you can easily switch between seat and bed. In other cabins, once I ask to get my bed made, I’m generally not going to ask to have it unmade until landing, so I find myself eating in bed if I want a mid-flight meal or I’ll be working in bed, which I find a little bit awkward at times. With this configuration, you can sit in a proper seat to eat your meals, or you can sit down and pull out the tray table to work if you like. 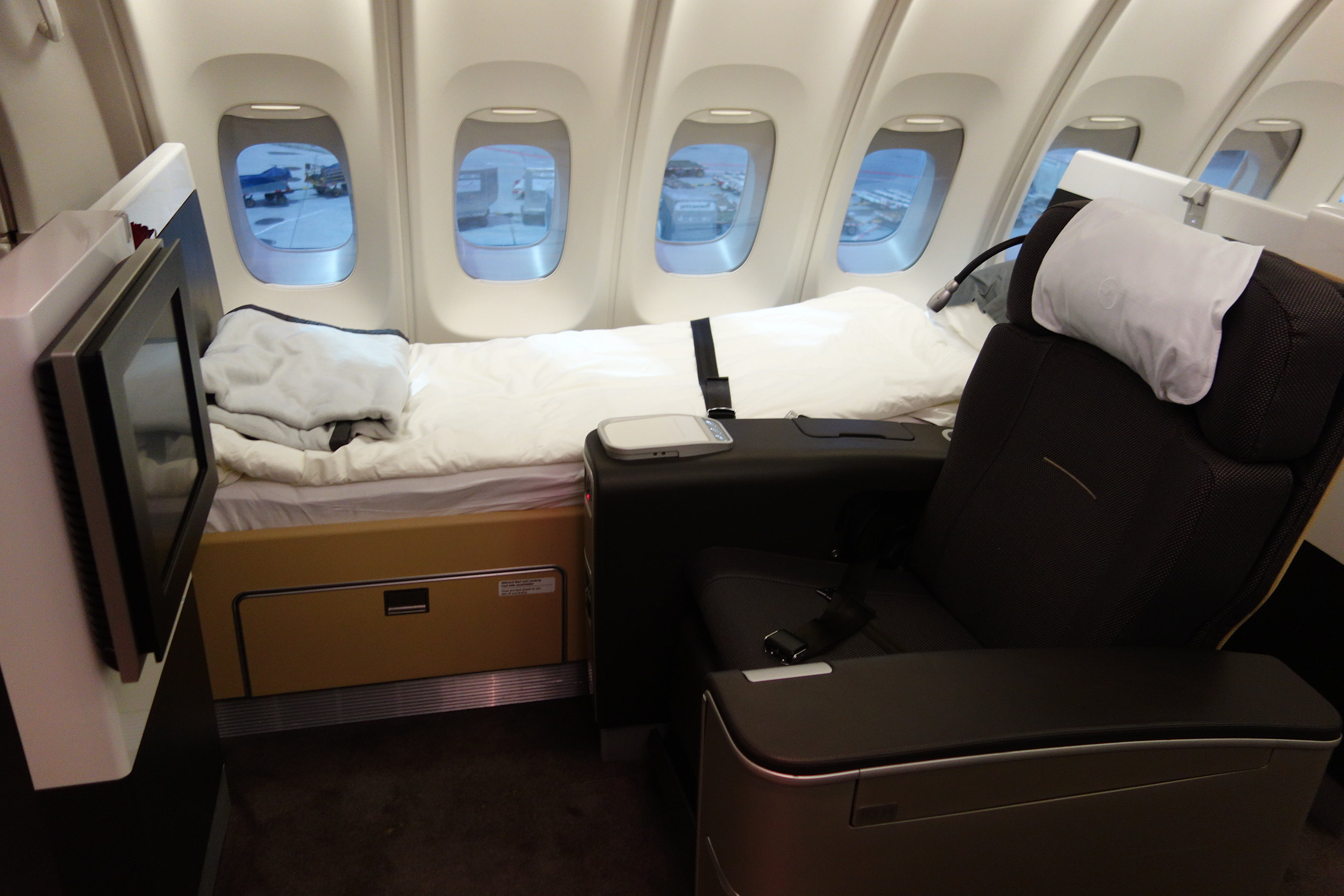 The most comfortable bed I’ve slept in on an airplane I also appreciated that the beds are located next to the windows, which makes for some awesome lying-in-bed-looking-out-the-window moments since you can just turn your head and you have a perfect view out the window, as well as the fact that it’s generally slightly cooler next to the windows and most of the time I find airplane cabins to be too hot. The underbed storage is also extremely convenient as you can reach it while strapped in to your seat, as opposed to the ottoman storage on the A380 which I can only access after unbuckling my seatbelt.

After settling in, I was given pajamas, an amenity kit, and the menu for the flight. In an attempt to adjust back to US time, I decided to sleep immediately after takeoff and hold off on eating. I asked a flight attendant to save me some caviar, the gnocchi, and the roast goose, which she happily obliged. Menu for the flight

I slept soundly for a couple of hours, and it was honestly probably more comfortable than the bed that I have at home. I never felt overheated, and it was amazing to just turn my head and be looking out of an airplane window.

I think it’s worth mentioning that on this flight as well as on my previous Lufthansa flight, I felt that one of the two flight attendants was superior to the other, and in both cases, the better flight attendant was the younger one. It’s not that the older flight attendants were bad per se, but the younger ones seemed to be slightly more on top of things, more attentive to detail, more conscientious about what passengers would want before they asked for things, and friendlier. After I woke up, the older flight attendant was the one to serve me my meal, and there were a couple of miscues in the service. For example, the bread served with the caviar was really, really crusty and dry, the caviar was served with lime instead of lemon (yes, I feel like such a dick to be criticizing the caviar accompaniments), I was given two pepper grinders instead of a salt and a pepper one, and my glass wasn’t refilled regularly. The meal was objectively good, but I shared my thoughts about Lufthansa’s catering in my trip report of my previous flight. The caviar was delicious as always, even if it was served with crusty bread and a lime, and I appreciated that they served me a generous portion of caviar when I had told one of the flight attendants before sleeping how much I enjoyed eating it. The gnocchi was quite heavy and chewy for gnocchi but still tasty. I ordered the roast goose on the recommendation of a flight attendant on my previous flight as he told me that it was a good representation of German holiday cuisine, and it was a little dry but hearty and flavorful.

I didn’t really use the in-flight entertainment system, but the options seemed a little limited to me (disclaimer: all I want to watch on planes is animated children’s movies or rom-coms). There was also wifi available on the plane, and the other three first class passengers seemed busy at work on the internet for most of the flight.

With about 90 minutes until landing, the younger flight attendant came around with the pre-arrival snack trolley. I selected a couple of items, and the flight attendant sold me hard on a goulash served in a bread bowl that wasn’t on the trolley. I’m glad that she did, as it was probably the best non-caviar dish that I had on either of my Lufthansa flights. Snacks and goulash in a bread bowl

After we landed, the younger flight attendant told me that I could go visit the cockpit if I wanted, as she saw how much I loved planes and flying. So I had the brief opportunity to check out the cockpit while everyone else was disembarking, although the pilots clearly just wanted to get off the plane. Overall, I think the seat and dedicated bed combination is the most comfortable first class configuration that I’ve flown. While I prefer almost everything else about the A380 (e.g. the larger bathrooms, the quieter plane), I’m not sure how you can get much better than Lufthansa’s 744 if the first class cabin is more than half-full.